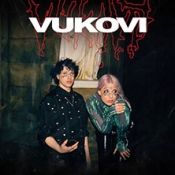 Two years on from their critically lauded second album, Fall Better and a whole load of global weirdness in-between Vukovi return with a record that is the best distillation of their unique musical vision yet.

Now a two piece, Janine and guitarist Hamish Reilly have spent these strange two years gone plotting in their Glasgow base as to how best to achieve this. Like any artist whos toiled over their work, Janine is keen for the record to tell its own story. And yet excitingly, they are planning a novella book supplement to the record down the line.

Ive always been into sci-fi, Janine says. Growing up I loved Star Wars, The Fifth Element, Alien and sci-fi was an escape from the pain. I could sit in my bedroom and look out the window and know that there was something so much bigger going on. Thats what I want this album to be for people. An escape.

We were probably always going to end up doing something like this, laughs Hamish. I grew up obsessed with bands like Rush and Dream Theatre, so music that tells a story has always been something Ive been into. I think theres always been a sci-fi element to Vukovi too, or at least a cinematic one.

Janine worked on the framework for NULA with the Scottish based scientist and young adult fiction writer Lisa Gourley. It was important to me that the science made sense, says Janine, and that I worked with a woman, and that she was someone I could get pissed with.

The record starts with an announcement of interplanetary travel. Nula is a captured extraterrestrial thats now the property of a nefarious capitalist. NULA picks up 25 years after her capture. And in-between theres all sorts of comment on themes of trauma, violence, lust, and revenge.

Im working things out via her, I think, says Janine, whose visual look varies from video shoot to video shoot. Im trying to get more comfortable in my own skin. I love dressing up.

NULA is stuffed with the sort of big punchy extreme pop that has made Vukovi a band to be reckoned with. Theres a stab of nu metal here. A veneer of shoegaze there. Lots of electronics. More samples than ever. Ive had so much fun making this record, says Hamish. I sometimes think I can overcomplicate my playing, just because I need to keep myself interested. But Ive gone all out on NULA, and everything that is there is something that needed to be there.

Which means the anthemic synthetic pop of the excellent SLO, which as is the case of many of Vukovis best songs deals with Janines diagnosis of Obsessive Compulsive Disorder. Its almost like a love letter to something I hate, something thats caused me so much suffering. But its also me wondering if I would cease to exist if it was removed from me.

Or the heavy rush of I Exist, which sees Janine push through the pain of mental illness and realise that she is worthy of life and deserving of joy. Im really interested in exploring the idea of joy, says the singer. Ive had enough misery in my life. Theres a song I really like early on in the record called Quench, which is about sexual liberation from a womans perspective, which I dont think we hear about enough.

And yet, fittingly for a record as bold in its ambition as NULA is, its not a record that only looks inward there are big themes being explored on the album. Its 2022. The world is ablaze, how could there not be? I think about whats happening in the world too much, says Janine. The way the rich are getting richer and the poor getting poorer. The greed. The cruelty. Theres a lot of that on the record, and in Nulas story.

Like on the agitated Shadow, which takes the metaphor Janine has long used to describe her OCD, but stands up, stands tall and fights back against it and the misery of the world. I want that song to inspire people, she says. I want it to light a fire under people to fight for whatever is bringing them down. That rage passes on to the records subsequent song, Hades. I wrote that song when I was in the worst place, she says. Its really about me fighting to get my soul back.

The record closes with more rage with Janine speaking her list of demands atop the remarkable XX. What does the future hold for the female of the species, she states, like Renton from Trainspotting with different chromosomes. Whether shes talking about herself or Nula, is never quite made clear. And yet its unquestionable that NULA is not of this world.